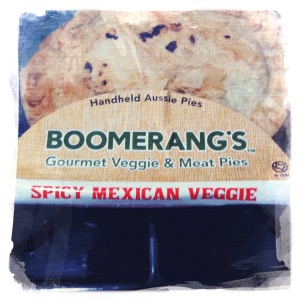 Today I ran into Whole Foods Market and as I was headed to the checkout counter I was drawn to the deli area.  There next to a heated display swarmed shoppers like bugs drawn to light.  And there I discovered the Aussie awesomeness of Boomerang’s Gourmet Veggie & Meat Pies.  What a thrill to discover meat pies reminiscent of my visit to New Zealand.

For those who aren’t familiar with this Australian favorite; meat pies are flakey, handheld and considered the “national dish” of New Zealand and Australia.  For Texans it’s like an empanada collided with a pot pie. 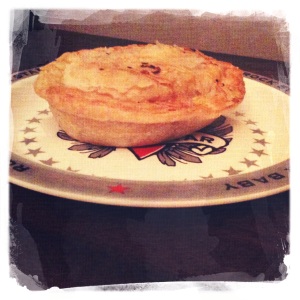 These vegetarian delectables are a meal unto themselves.  Whole Foods was introducing them for $3.99 today and will sell them for $4.99.  This might seem steep, but these pies are thick and stuffed full with vegetables. I felt like it was a fair price, especially since I can’t eat lunch for less than $8 these days. I didn’t walk away hungry.

Checking out their website I discovered these savory pies are sold in Whole Foods throughout Texas, Louisiana, Arkansas and Oklahoma.  Don’t live near one of these awesome states or have a Whole Foods near you?  No problem mate, they also ship.