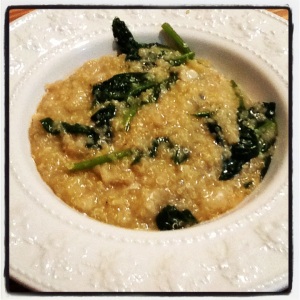 Earlier this year I realized that I’ve never tried quinoa. I have friends who swear by it and calls it the “wonder grain,” and others who are grossed out by how it emerges from it’s shell.

So while I was at Whole Foods looking for tasty grain and legume options to incorporate into our meal, I decided to pick up a small bag of quinoa for the experimenting.

After a search on Google for some quinoa recipes I discovered this Quinoa Goat Cheese Risotto by Cooking Quinoa. What a terrific recipe to try quinoa for the first time, because the grain doesn’t come out dry and crunching like it can in many other recipes.

And though the goat cheese rendition is quite tasty, I’ve switched it out for gorgonzola cheese, to give it a bit of a tart kick. Either cheese choices are excellent.

I’ve had problems (perhaps lack of patience) making risotto before with rice, however this recipe is super easy — it just takes time. So be sure to plan for cooking to liquid down to a nice creamy texture.